Samsung rolled out Bixby updates, the company completely disables the...

Samsung ‘s Bixby voice assistant feature was introduced in the company’s flagship smartphone Galaxy S8, S8 Plus and Galaxy Note 8. The feature was quite useless, but the developers want to remap the button instead of the company wants to remove the feature.

However, the company removes the button form the smartphone, but you can see the Bixby virtual button on the smartphone. Most of the users consider it an annoying feature when you press the screen. Now, finally, the south Korean tech giant completely disable the Bibxy from its smartphone devices.

However, we have been waiting for the removal of the virtual Bixby button, but developers hope to work better for it. The last rumors and news about the voice assistant button for the Galaxy smartphone was a complete removal of the button, but pressing it, it was activated the screen. The Samsung is rolling out latest Bixby updates that completely disabled the functionality of the voice assistant button. According to the report,

Samsung has updated the Bixby service that analyzes saved contacts when call commands are dictated to Bixby, which might allow it to call people with oddly-spelled names.

Moreover, it was a cold war between the developing community and Samsung for the Bixby button updates. The developer community released a lot of tweaks to improve the functionality, but due to the rigid behavior of the company wins over the developers. The company is rolling out the updates over the air. Galaxy S8, S8 Plus and Note 8 users will receive the notification of the updates that will completely remove the annoying useless button functionality. 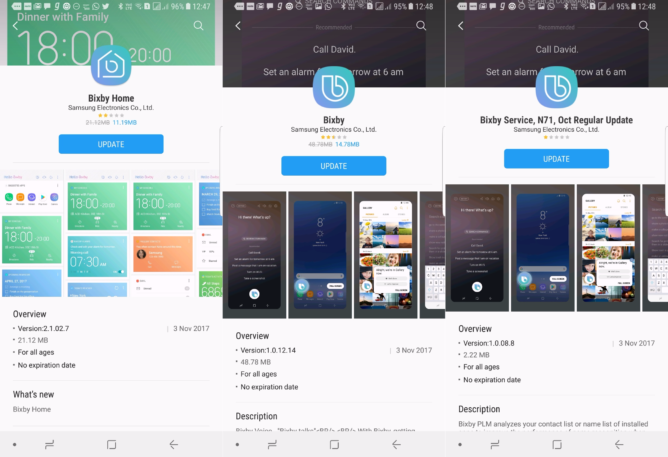 The users can update Bixby to the latest version, by tapping on the Galaxy Apps > My Apps > Update > Update All. What you think about the Samsung behavior for the Bixby voice assistant? Share your views with us by leaving comments in the comments section given below!