Meet Pooh, The Rescue Cat Who Just Got Brand New Legs, And Nobody Is Going To Stop Him Now 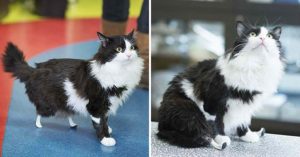 Animals live to hunt or be hunted, kill or be killed. They can fend off for themselves, find food and shelter, and adapt spectacularly to any given situation or environment they might find themselves in. More so with strays. Stray cats and dogs are toughened up by the streets and usually survive for a long time. However, injuries caused by accidents or abuse can greatly hinder the life of a stray in the mean streets of our big cities. This is what happened to Pooh, who was found gravely injured in the streets of Sofia, the capital of Bulgaria. Thankfully, Pooh was given the care he needed and now has a new lease on life. It was unclear how Pooh got injured, but the kind woman who found him brought him to a clinic and a surgeon named Vladislav Zlatinov Having examined Pooh, Dr. Zlatinov found that Pooh needed to be amputated. The complications of this procedure could cause Pooh to be euthanized. Not wanting that to happen, the surgeon had a brilliant idea. He fitted Pooh with prosthetics: “I had the vague idea that this is done sometimes, but it sounded impossible for our practice,” Zlatinov said. “But I wanted to try.” Now Pooh has adjusted well to his new limbs, thanks to Dr. Zlatinov. “Pooh can move freely on flat surfaces, walking, running, even making small jumps. What’s important is that he doesn’t seem to be in pain.” Pooh’s story gives hope to so many injured animals. Pooh is now in “Let’s Adopt”, a shelter in Bulgaria, recovering from his injuries and waiting for his new family to come find him. With his incredble story, we’re sure he’ll find his forever family really soon!